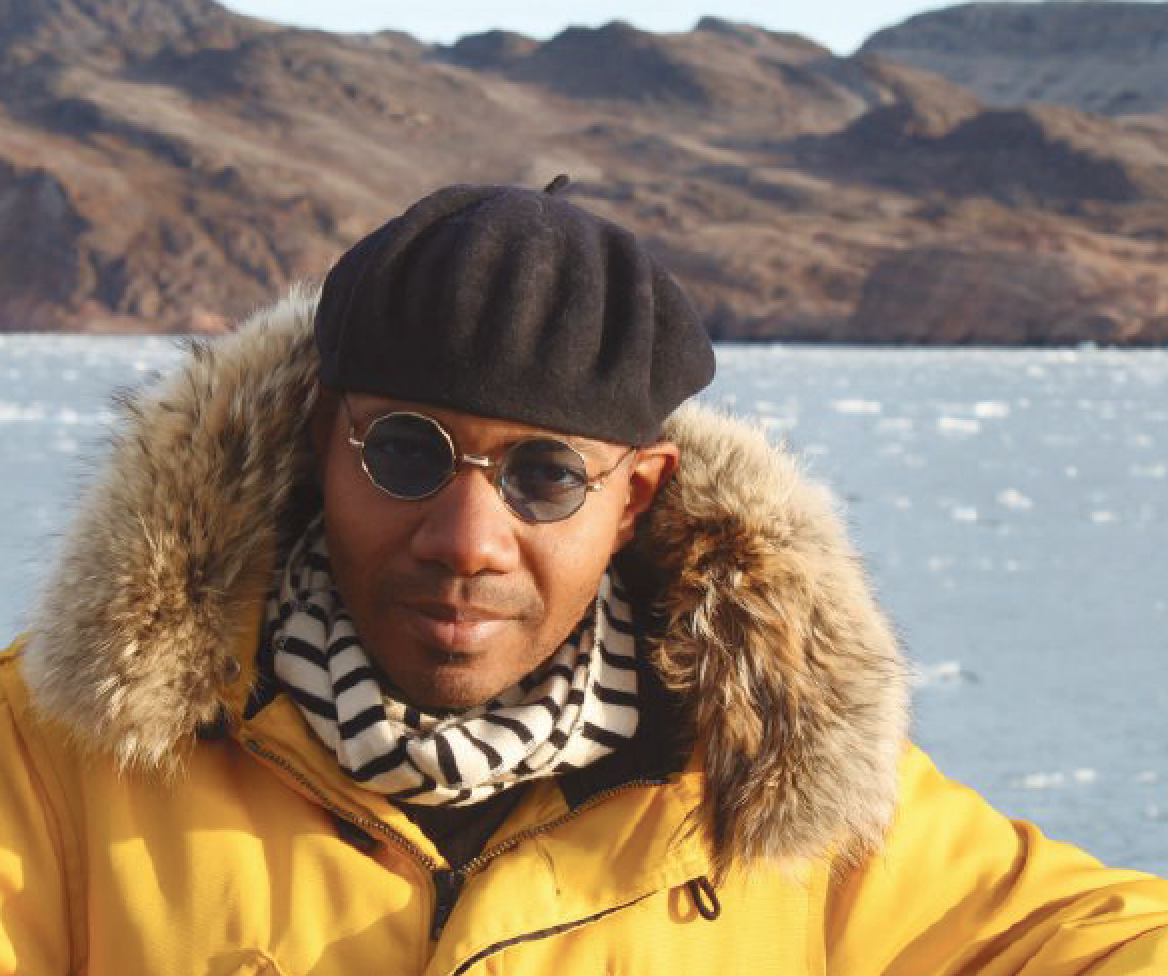 Composer, multimedia artist, and author Paul D. Miller brought his creative talents to bear in presenting perspectives on topics from climate change to race and offering students different ways of thinking about social justice. The 2016 Frederick Douglass Fellow, who performs as DJ Spooky, was brought to campus through a collaboration among the C.V. Starr Center for the Study of the American Experience, SANDBOX, and the Department of Music.

The first event, “The World of DJ Spooky,” served as an introduction to remix culture and focused on Miller’s album Of Water and Ice. In traveling to Antarctica to paint the acoustic portraits of ice found on the album, Miller wanted “to see what would come out of the collision between city and the most remote parts of this world.” In Antarctica, Miller found stunning beauty on a grand scale, but as he showed photographs from his trip, he pointed out to the audience, “What you’re seeing is devastation. There should be ice.”

Through a combination of lecture and performance, Miller brought to stage the idea of the landscape in sound and data. “I think as the 21st century goes, you’re going to be seeing a lot more artists and creatives thinking about the new palette that data allows us to activate.” Data forms the backbone of his album. Joined on stage by professor Kimberly McCollum on violin and Nicole Spehar on cello, Miller showed the audience in real time how that worked. Using the mathematics of ice and temperature differentials from his trip, he mixed live music on his iPad, combining algorithmic musical transcription with notated music inspired by Antarctica.

Miller delved further into the idea of data and humanity in his Thursday afternoon demonstration. Using the DJ Spooky iPad app, Miller pulled music from his iPad and the web to make on-the-fly mixes and explain the art of sampling. In one such example, he used “Nuper rosarum flores” by Guillaume Dufay — an isorhythmic motet inspired by the shape of the Florence cathedral — to show that mathematics and data in music date back to the early Renaissance.

In a different take on remix, Miller hosted a Q&A and screening of his radical reinterpretation of the century-old silent film The Birth of a Nation, which was significant for its advancement of modern film but also explicitly racist. Applying the logic of DJ culture, Miller reworks the story and provides the score for his version, Rebirth of a Nation.

“Seeing Rebirth of a Nation was both chilling and inspiring for me, and I think for many of the students in the audience as well,” notes C.V. Starr Center Director Adam Goodheart. “The original 1915 movie, while a landmark in the development of filmmaking, speaks to some of the darkest fears and hatreds in the history of American race relations. But Paul D. Miller proved that through artistic re-appropriation and re-imagination, an old work of art can become something new. He unearthed eloquence and ambivalence that were lurking just under the surface of Griffith’s racist propaganda.”

This piece originally appeared in the Spring 2017 issue of Washington College Magazine.